This time around we go off the rails a little bit. I happened to back to comic Kickstarters. Trust me the games will be back next session but more and more of these will pop up as we move along.

Help us launch an online comic where two luchadores are cast into an unknown world where they battle evil and restore peace.

Why I Backed This Campaign
I am an ardent fan of comic books and web comics. I am also a fan of professional wrestling; Spartacus Publishing produced Luchador: Way of the Mask. This project is squarely in my nerd wheelhouse.

What did I get for my Support?
The campaign did not fund but the creators did eventually launch their web comic. I have reached out to them with the possibility of licensing their world as a stand-alone L:WotM Supplement. Will need to follow-up on that again…

Final Thoughts
As I write this Oatmeal’s Exploding Kittens is crushing Kickstarter, a classic example of activating your crowd in crowd funding. Though I think they had a good idea and some great art the creators went to crowdfunding too early. Their next campaign, after putting out many updates to their web comic, was more successful.

Spacetrawler Book Two
I am raising funds to print the second collection of the webcomic “Spacetrawler.” 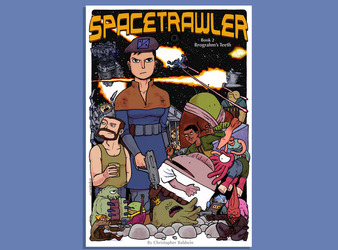 Why I Backed This Campaign
Did you see the earlier post about web comics? Now just replace wrestling with Sci-Fi! Actually, I was reading this comic regularly. I jumped from creator’s site straight to Kickstarter when he launched the campaign. I am the activated crowd.

What did I get for my Support?
I like to think I directly helped support a comic creator; similar to buying original pages at a con. I am also a firm believer that a product in hand with the weight and feel of reality is better. The art is eclectic to say the least but the writing is top notch. Plenty of action goofy adventure, political interplay, and just enough inter-species sex to keep things nice and salacious.

Final Thoughts
His product was ready to go. I know because the campaign was launched with the finale of book 2. All that was required was pre-orders. In some ways I think this was one of my first experiences as Kickstarter as pre-sale store. Though over time I have been less inclined to back a pre-order Kickstarter campaign it has become a new reality on the platform.