The Terran Alliance is cast in the role of good guys, but is not without negative traits.  This is a war game and there needs to be opportunity for fighting your own team in the fluff. Also the Terrans, though united in ideals, are splintered across old political alliances, business interests, and even religious beliefs. The Alliances is basically an optimistic view of Earth like cultures engage in space exploration.  The vast majority of Terran craft have an aerodynamic design with a solid hull. Large ships are boxier and overbuilt, often with sharp tapering angles, able to survive intense and protracted use (Battlestar Galactica, Space 1999, etc.). Though there is a staggering array of ship designs Terrans typically put the cockpit, or command bridge, in the fore of the ship

Terran personnel wear near form fitting but not skin tight uniforms.  Exploration/assault teams wear breast plates and open-faced helmets akin to Starship Troopers.  Despite the military theme stress the individuals, hence the open-faced helmets.  The Terran forces bravely face the dangers of exploration to blaze a trail for others.  Their soldiers volunteer to face the enemy in the depths of space to prevent them from reaching the homeworld.

The forces of Alpha Centauri draw from dystopian fiction, the state is mother the state is father. Everyone has a role they must serve or they will be replaced by the next in line.  They are xenophobic and actively expand into space to launch preemptive strikes against the alien enemy.  The Centauri, in all walks of life, typically wear military style uniforms. (The look evocative of the German military of the Third Reich.)  Square cut shoulders and high, gorget-style collars. The Science Elite wear long coats, while the military use obvious body armor, both enjoying peaked hats. Soldiers wear helmets with opaque, often mirrored, face masks to present the enemy with a faceless terrifying opponent.

Alpha Centauri ships are more sprawling then their Terran counterparts. Spires thrusting out of open frames designed with sinister intent. The ships are rarely designed with any sense of symmetry or aerodynamics. Hulls are solid only over vital areas with scaffolding and the internal structures of the ship protected by force fields. (The ship design from Aliens or 2001 are good examples of this design motif.)

You can see this difference in how the two races approach their signature Directives. This piece was prepared by Gabe Ivan for his own notes.

Directive cards in Nearspace provide ongoing advantages as long as the player devotes resources to keep them in play. While the game offers many directives to choose from to meet the strategies and schemes of different play styles, two are exclusive of one another. These cards represent the core ethos of the Terran Alliance and the Alpha Centauri Regime. 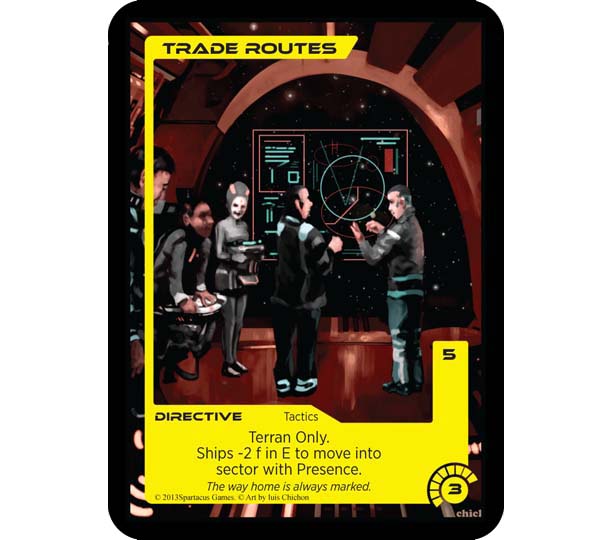 The Terran Alliance thrives on the opportunity for expansion. Every inhabitable planet discovered sparks a race to colonize between disparate isolationist factions looking for a world of their own. Every airless world, moon, and asteroid promises new resources for harvest to the company that can extract them. Every new system reached offers a new horizon to challenge the restless explorers.   And with each intrepid step humanity takes into the void, the potential for profit along the supply lines grows. Competition to secure trade routes inspires ruthless ingenuity among merchant fleets. Every slingshot and shortcut that could cut time or fuel out of the delivery is explored. Deals between unlikely forces are brokered and sealed with discounted rates and guaranteed deliveries. With so many standing to benefit, the fastest and most efficient routes from the Terra to each colony quickly become available to the Terran Alliance Fleet at a very reasonable price. 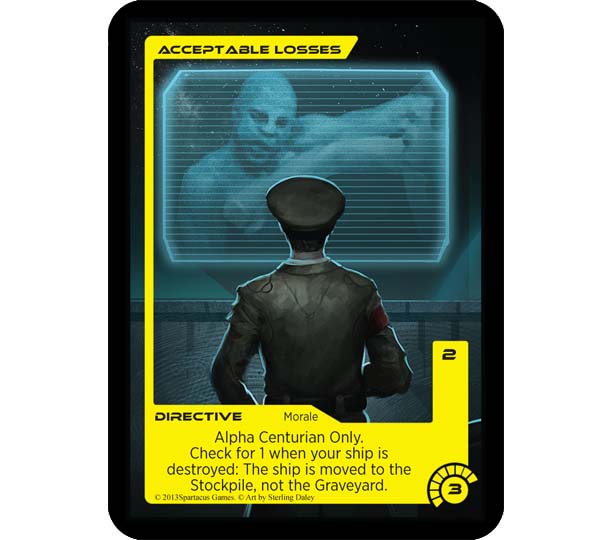 Every child learns in introductory education the danger of the Alien Threat. Every citizen does their part to provide for the military that keeps the Alien Threat at bay. Every soldier gives their all to exterminate the Alien Threat for the good of Alpha Centauri. The inevitable confrontation that the Regime has spent centuries preparing for is finally upon the people of Alpha Centauri. This is the time of glory or extinction! Not all will survive, but the path to victory is never easy. As the Ministry of Discipline reminds us all,” Order Demands Sacrifice.”